Join or Renew Get Updates Donate 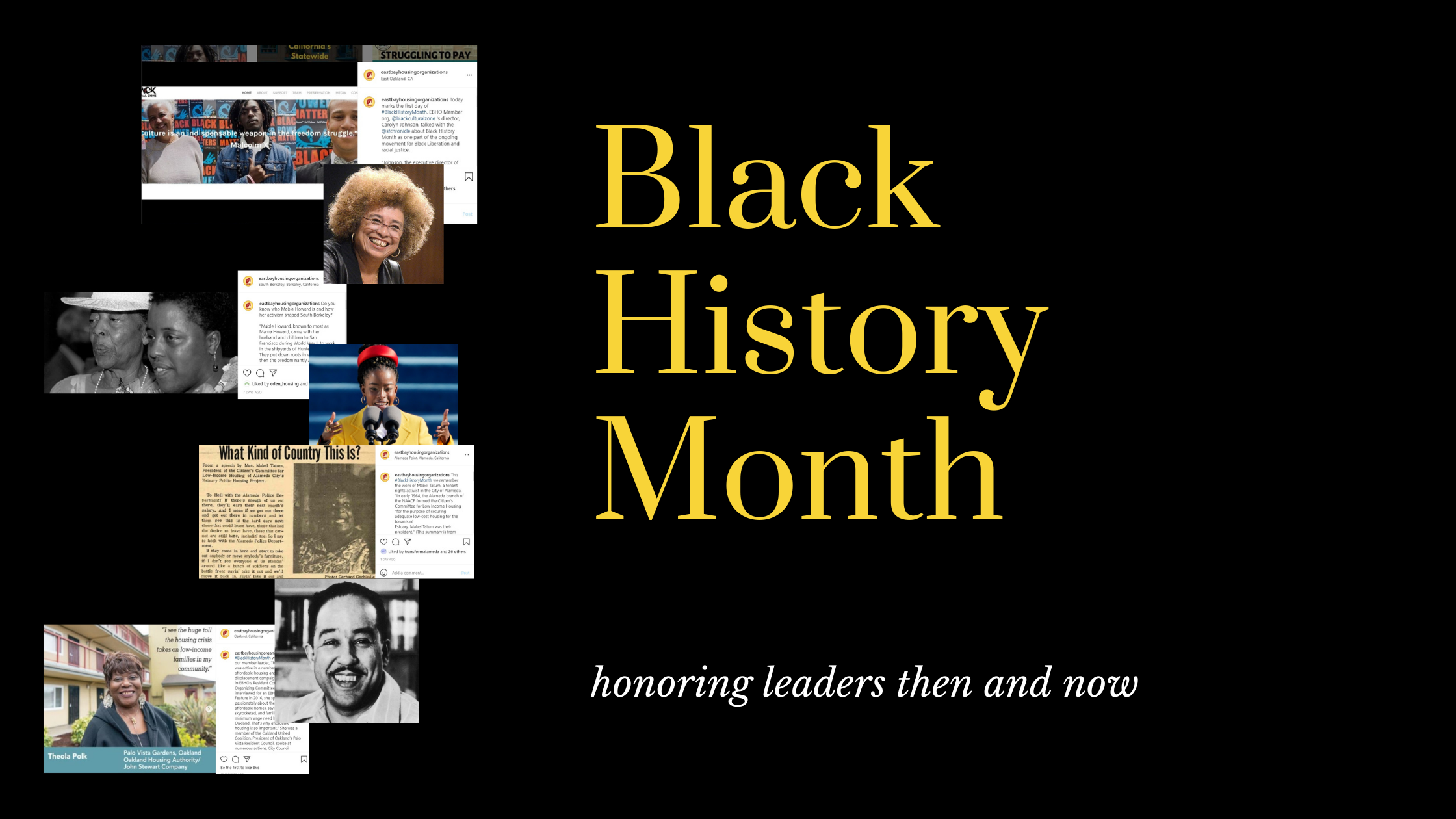 We asked past and present EBHO Board members to share some names of those they honor during Black History Month. Here are their reflections, along with links to learn more about those lives and leadership of these leaders working for Black liberation, civil rights, and housing justice.

Read more about the work of Ella Baker and Fannie Lou Hamer.

Learn more about the life and work of Dr. Angela Davis.

This month, EBHO has shared information on our social media pages about local leaders for housing justice and equity in our region that impact the work we do today. You can follow us on Instagram, Twitter, Facebook, and LinkedIn.

“What would it mean to show love for Black people?” Johnson said. “What can you do to help improve the plight if you really truly believe the plight is undeserved? That takes dedication.” Through her organization, Johnson said she plans to hold a drive-in movie on Feb. 12 to showcase Black love. In addition to other Black History Month events hosted by Black Cultural Zone, Johnson encouraged people wanting to support Black businesses to go to the monthly Akoma Market, made up of Black and brown vendors, at Liberation Park in East Oakland.

“For Black History Month and beyond, I encourage the public to support Black-led organizations, support Black-led leadership. You have a lot of organizers working on the front lines, who are underfunded, who can barely put a roof over their heads or food on the table, so find projects and organizations and people to support directly,” (Candice) Elder (East Oakland Collective) said. “We consider the donations that we are able to get as reparations,” she added.” You can read the full SF Chronicle article here.

MABLE HOWARD: Do you know who Mable Howard is and how her activism shaped South Berkeley?

“Mable Howard, known to most as Mama Howard, came with her husband and children to San Francisco during World War II to work in the shipyards of Hunters Point. They put down roots in what was then the predominantly African-American area of South Berkeley, and Howard spearheaded many significant political and community projects. Most notably, her lawsuit against BART in 1968 was a major factor in forcing the transit district to underground the trains that traveled through her neighborhood, preventing the division of the black and white sections of town by a set of tracks.”

This #BlackHistoryMonth we remember Ms. Howard’s contributions and legacy. Mable Howard now has a Sr. affordable housing complex named after her in South Berkeley. Ms. Howard’s daughter, a successful artist, was priced out of the city, part of the larger trend of the displacement of long-time Black residents from the neighborhood. As we remember, we fight for policies that affirm Black Lives, specifically those that provide and preserve affordable housing for those that need it most.

Thank you, Mable Howard. You can read more about here life here.

MABEL TATUM: This #BlackHistoryMonth we remember the work of Mabel Tatum, a tenant rights activist in the City of Alameda. “In early 1964, the Alameda branch of the NAACP formed the Citizen’s Committee for Low Income Housing “for the purpose of securing adequate low-cost housing for the tenants of Estuary. Mabel Tatum was their president.” (This summary is from “Renaming Jackson Park: Top 10 Names Background and References” created by the Committee to Rename Jackson park)

Here’s a quote from Mrs. Mabel Tatum’s speech titled What Kind of Country is This? The speech was given at a tent-city protest during which residents of Estuary Housing, public housing owned by the Housing Authority, who were being displaced without reloaction, camped at the park nestled among some of the wealthiest landowners in Alameda at the time.

“Now I can’t get a house no sooner than you can and my husband’s in Vietnam…A beautiful world isn’t it. Salute the flag. Justice for all. What kind of country is this we are fightin’ for? What kind of a country is this, you can’t even exercise your own rights to live where you want to live? What kind ‘of country this is that we as a group of people can’t protect our own rights whether it’s legal or illegal? It’s gotten to the point now where we’ve got to throw the legal part aside. I’m not sayin’ out and grabbin’ somebody and knockin’ ’em down. You don’t have to do it that way. You can do it systematically and win that way.”

You can see the full speech on page 3 of “The Movement,” published by the Student Nonviolent Coordinating Committee (SNCC) of California.

Her leadership provided a foundation of tenant organizing and racial justice in housing in the City of Alameda all these decades later. Her work also reminds us that public and affordable housing organizations must enact racial and economic justice through their policies and practices.

THEOLA POLK: This #BlackHistoryMonth we remember our member leader, Theola Polk, who was active in a number of Oakland affordable housing and anti-displacement campaigns and a leader in EBHO’s Resident Community Organizing Committee (RCOP). When interviewed for an EBHO Member Feature in 2016, she spoke passionately about the need for affordable homes, saying “rents have skyrocketed, and families living on minimum wage need help living in Oakland. That’s why affordable housing is so important.” She was a member of the Oakland United Coalition, President of Oakland’s Palo Vista Resident Council, and spoke at numerous actions, City Council meetings, and participated in faith-rooted events such as EBHO’s Interfaith Communities United ‘Sacred Land, Sacred Communities’ Anti-Displacement Vigil for Coliseum City.

Originally from Arkansas, Theola had a long history of participation in justice work. She recounted vivid memories of participating in sit-ins against segregation policies in Little Rock or switching the “white” and “colored” signs on water fountains and bathroom doors. As she describes it “The Klansman ran us out of Little Rock.” Barely into her 20s, Theola boarded a bus that took five days to get to Oakland – where Theola built a life and a legacy of fighting for her community.

“I’ve really enjoyed being a part of that [Oakland United] campaign,” said Theola, “Parts of Oakland are being totally overlooked and people are being displaced. We’re organizing to stop displacement so that families can make ends meet and have a roof over their heads,” she said. Theola Polk died in 2019, and is greatly missed by her community of EBHO member leaders and her family. With her memory close, EBHO members continue to fight for affordable homes and anti-displacement policies in Oakland. Thank you Ms. Theola Polk.

#BlackHistoryMonth is one container to hold intentional time to remember and honor the rich history of Black people in the United States and beyond. We celebrate and lift up the work of Black leaders (in EBHO and beyond) throughout the year. Thank you for being with us to fight for racial justice as housing justice in the East Bay. If you’re not on our e-mail list, please sign up today! We want to share ways to plug in to the fight for housing justice and fight for policies that support Black lives with housing, healing, and connection in the weeks and months ahead.